After four months of eggcitement it's time to bring The Egg Award 2013 to a close, and with entries from all over the world it's been a privilege and a pleasure to have been involved in this eggcellent competition.

The success of the award this year means that next years will be bigger, better, with different categories and the inclusion of a Charity Recipe Book. 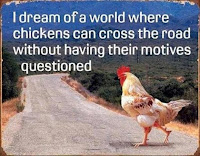 The organisers of The Egg Award would like to take this opportunity to thank the Judges for their hard work in determining the winner and runners-up, our sponsors for their generosity in donating the prizes, everyone that's been involved in Tweeting or sharing The Egg Award and of course our entrants, home cooks and professionals alike - for their imagination, effort and help in promoting fresh local eggs!


So without further ado here's the winner and runners-up of The Egg Award 2013 in reverse order.....


In Fourth Place and with a 'special mention'.....

Toronto food blogger Ann Allchin with her Duck Egg and Prosciutto Baskets.  Ann will be sent the signed print by Ulrika von Sydow. 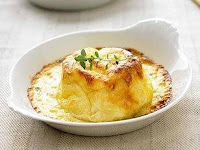 
Vivienne will be receiving a set of Blackrock Ceramic Knives. 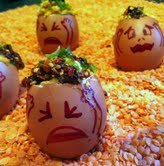 Tony will be receiving a Polyscience Smoke Gun from sousvidetools.com.

In First Place - and the Winner of the inaugural Egg Award..... 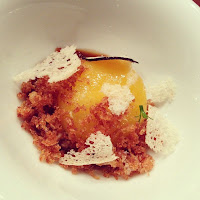 Danny will receive the unique, hand-carved driftwood Egg Award Trophy and the print donated by Armadillo Central will be taking pride of place at Ganso Iberico.


Native Andalusian Dani Garcia of Calima restaurant in Malaga is a 2 Michelin Star chef who is also responsible for the various products developed at Ganso Iberico and a promoter of it in the Gastronomic World.  The simplicity of his recipe along with his and Ganso Iberico's ethos mirroring exactly that of The Egg Awards made it a clear winner.  Whilst the recipe is the creation of a Michelin starred chef, it's well within the capabilities of a home cook to follow.

This years Judges were.....

Rachel McCormack teaches the Catalan style of cooking In classes at Bea’s of Bloomsbury where Rachel tries to re-create the kind of meal that she has at her friends’ houses in Barcelona and other parts of Catalonia.  She's also a panelist on The Kitchen Cabinet, a Radio 4 food panel show presented by Jay Rayner.

Another great acquisition for the judging panel for the inaugural Egg Award is celebrated chef Ernst van Zyl who is currently Head Chef at the 2 AA Rosette Etrop Grange Hotel in Manchester, and has recently made some big waves in cooking circles producing some much lauded dishes which are as stunning in their presentation as they deliver on flavour.

The Egg Award was pleased to welcome Masterchef 2012 contestant Alec Tomasso to the judging panel.  He narrowly missed out on making it through to the next round and since then has gone from strength to strength with his own food blog, The Weeping Chef, working in 1 and 2 Michelin starred kitchens and cooking up a storm as chef in The Cheese Kitchen Bistro, Bedford.

The fourth judge invited to take part in The Egg Award 2013 is rising talent Jonny Marsh from Manchester.  As a schoolboy Jonny spent every Saturday working in the kitchens of the sadly now defunct Manchester restaurant, Brasserie Blanc, despite being too young to be paid.

The final addition to The Egg Award 2013 judging panel needed little introduction as it's Edinburgh chef and BBC 1 Great British Menu contestant Mark Greenaway! He's chef patron of  Restaurant Mark Greenaway, which is based on 69 North Castle Street, Edinburgh.  The restaurant first opened in 2011 at its original location at No 12 Picardy place, where mark soon gained a superb reputation for its imaginative, creative and modern style of cooking.

The winner of The Egg Award 2013 will be presented with a unique trophy of a hand carved driftwood egg donated by ecoYoga.

At ecoYoga they run courses and retreats throughout the year and they invite you to find out more about these on the yoga page.  When courses are not running you can stay with them on a self-catering holiday and enjoy the facilities of their wonderful Yoga studio in your own time, have a hot tub, sauna or enjoy a wild river hot bath.

Those lovely people at Blackrock Ceramic Knives have donated a set of their outstandingly sharp knives!

We're delighted to have them as a prize as BlackRock® ceramic knives are a market leader in high quality ceramic knives, with their origins in the Far East it's amazing that these knives have been kept a secret in Europe for so long. Once the reserve of professional chefs and now available to all.

Another addition to our list of prizes is this fine art print 'Two Steps Forward One Step Back' by Juliet Kepes (1919-1999) - painter, illustrator, sculptor and children’s book author, born in London in 1919.  The print has been donated by Armadillo Central who publish original writing alongside fine art and photography. The lovely people at sousvidetools.com have donated a PolyScience® Smoking Gun

They're the UK's leading supplier of sous vide and vacuum packing equipment. Based in the North West of England they are a family run business that distributes all over the UK, Ireland and Europe to aspirational chefs and foodies who enjoy cooking, who strive for consistency and accuracy whilst always looking to further refine their cooking skills. At sousvidetools.com their portfolio of products offers everything you would need for sous vide cooking commercially or domestically, from sous vide water baths, thermal circulators, vacuum sealers, vacuum packing machines and vacuum pouches.

The fourth addition to our prize list is another fine art print of 'Fruits and an Egg', signed by the artist Ulrika von Sydow.  She's a Scandanavian artist mixing realistic portrayals with experimental art using mixed materials.
Posted by Fruitbatwalton at 07:59 No comments:

This recipe for The Egg Award 2013 is from Cafebarge, Tarbert, Loch Fyne in Argyll, Scotland.

It's one of their most popular small dishes and is a Spanish tortilla. 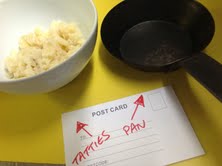 Peel and thinly slice potatoes. Put circa 2 inches of sunflower oil in a wok and bring to a low/medium heat. 'Poach' the potatoes in the oil until cooked but still quite firm (do not fry). 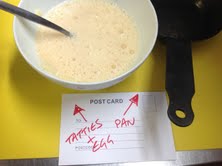 Crack 3 or 4 eggs into a bowl and mix in approximately the same volume of the prepared potatoes.


Use a fork to mix thoroughly but do not whisk. Season with salt and pepper. 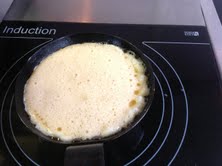 Heat the pan with a squirt of olive oil until just beginning to smoke. Pour in egg/potato mixture.


After a minute or two reduce heat to low. Shake the pan a little to stop the egg sticking. Lift and test the bottom of the egg with a fork to see if it is cooking (the top will still be very runny).

When satisfied that the bottom is cooked and forming a crust which will contain the runny mixture take a small plate, place the plate over the pan and, holding the plate firmly in place, smartly flip the egg mixture over so that the runny side is on the plate and the sealed side on the top.

Pour a little more olive oil into the pan and carefully slide the egg/potato mixture back into the pan, runny side down. 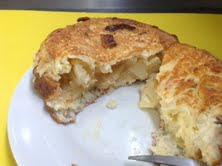 Repeat the above process two or three times until the tortilla forms a complete, quite firm, 'skin' containing the egg and potato mixture within - which should be almost runny and resembling the texture a poached egg with firm but oily potatoes in suspension.

The pan is certainly the secret ingredient in this recipe. Cast iron, small enough and deep enough to contain the mixture in the right proportions. About 5 inches diameter.

Posted by Fruitbatwalton at 09:35 No comments:

David Tanner on The Effect of Time on Eggs

The Effect of Time

North East chef and Egg Award entrant David Tanner gives an interesting insight into why fresh local eggs are better to use than the commercial version.

The shell contains on average 9,000 pores, and is 95% calcium carbonate, the other 5% being a mix of other minerals including soluble and insoluble proteins. The shells of commercial hens eggs are generally white or brown, although they can be coloured from pink to blue and even green. 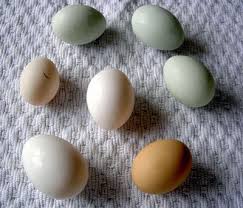 This is a genetic trait varying from breed to breed. Enclosed by the egg shell is the albumen (white). This contains 90% water, seven proteins, of which ovalbumin is the main protein (54%). The albumen also contains no fat.

The yolk generally makes up one-third an eggs overall weight, which when fertilized becomes the chickens embryo. The yolk also contains all of an eggs fats and cholesterol, and half of it's protein, and around four times the level of calories as the albumen. The colour of the yolk is a direct effect of the hens diet, a diet rich in xanthopylls (yellow and orange plant pigments) will give the yolk a 'golden colour'. 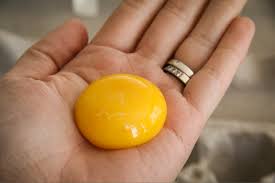 The freshness of an egg can also be determined by the yolk, as a fresh egg will have a firm, round yolk with a tight vitelline membrane. As the egg looses it's freshness the yolk will absorb some of the water from the albumen, causing the vitelline membrane to loose it's tightness and the yolk to become flatter in appearance.
Posted by Fruitbatwalton at 12:42 2 comments: